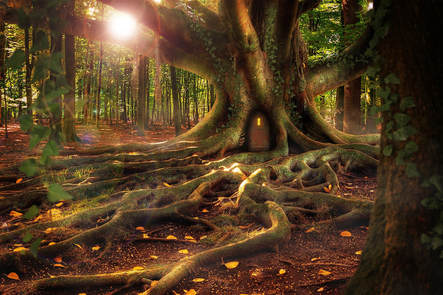 Pre-invasion Anglesey is a place of wonder and legend.  It is more what one thinks of in terms of 'high fantasy'.  There are elven, dwarven and other humanoid homelands that interact with each other and the human population.  Humans are divided into and by tribes.  This lack of unity keeps them from being a threat to the other races. Luckily, the others find the island humans useful for interacting with the much larger and more dangerous human populations on the mainland.
To mainlanders, Anglesey is mysterious and somewhat dangerous.  This view is certainly augmented by flagons of ale bought for story-telling Anglesey sailors in mainland port-city bars.
However, even the least imaginative human islander believes there are 'things' in the deep woods best left undisturbed.  'Things' that the elves will not speak of, even among just themselves.   Whether or not these 'things' are related to the horrors uncovered deep underground, no one knows.  The elves and the dwarves don't talk about it, except in very brief and extremely heated exchanges where they blame the other for disturbing or even creating these 'things'.  Unfortunately, such a lack of both unity and decisive action creates opportunities.....